Compromise is a Dirty Word 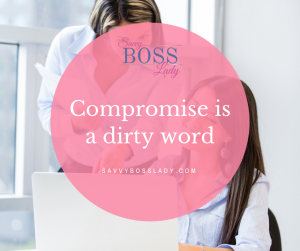 Compromise is a dirty word!  I know, you think I am insane.  We are told all the time to compromise…and told that it is the best thing ever in a negotiation or disagreement…but is it really?  The reality is that Compromise in the world of negotiation is a lose-lose position.  I hear you…you’re still skeptical.  Let me break it down for you.

Compromise usually looks and sounds something like this: Two people are discussing where to go to dinner and one wants Chinese food and the other wants Mexican food.  To “compromise” regarding the restaurant, both people agree to “meet in the middle” and decide to go to a taco truck that serves Asian-Mexican Fusion Tacos.  Now on the surface, this looks like a fantastic compromise…and it is!  The problem comes in the fact that neither party got what they wanted out of the decision and are left feeling disappointed.  Don’t get me wrong, Asian-Mexican Fusion Tacos sound delicious, but they aren’t REALLY what either person wanted.  It isn’t Chinese food, nor is it Mexican food.

So, let’s talk about that…is it REALLY a Lose-Lose scenario?  I mean, both people got dinner, and Asian-Mexican Fusion is a great cuisine!  While those things are both true, the purpose of a negotiation is to get your needs met.  And in our scenario above, no one got their needs completely met.  Both parties had to give some part of their needs up to satisfy the other.  And in doing so, both are somewhat disappointed by the outcome of the negotiation.

How then, can we turn Compromise into a Win-Win like we all think it should be, like we have been TOLD it is?  The answer is easy, and yet not so easy at the same time.  For Compromise to truly be a Win-Win situation, both parties have to get their needs FULLY and COMPLETELY met.  The only way to truly accomplish this is to look at the needs of both parties and see where there are opportunities to trade evenly across the board.

Let’s go back to our dinner conversation.  Looking at this from the perspective of a Win-Win Compromise, one way to handle this would be to go to Mexican food tonight and to Chinese food tomorrow night.  In that scenario, both people get their needs fully met by the negotiated deal.  I know what you are thinking though: What if I don’t WANT Chinese food tomorrow night?  I’m right there with you.  Sometimes what I want right this second isn’t what I want a day or two from now.

The important word in that last sentence is “want.”  In order to find a true Compromise position that meets both parties’ needs, you first must identify whether the disagreement is over a NEED or is it just a WANT?  Basically, is this something that I would like to have, but not something I must have?  If it is a want, then it is not crucial to maintaining a fruitful negotiation relationship in the future.  However, if it is a need, then you must tread carefully about giving up any portion of that need to another party.

In this scenario, let’s evaluate what the real NEED is versus the want.  If we look further, we begin to recognize that the type of food isn’t as important as the opportunity to CHOOSE the food that the two people will have for dinner.  Awesome!  Now that we recognize the true need and not just the want, we can structure our compromise to address the needs of the parties.  So, going back to our dinner example, tonight I get to pick where we go to dinner and tomorrow you get to choose.  This compromise trades dinner tonight for dinner tomorrow, allowing each person to decide that fully and completely meets his or her needs in that moment and in the future.  This is in stark contrast to the original compromise in which no one was completely satisfied.

I realize that this is a bit of a silly example, and some of you are saying “but Asian-Mexican Fusion is way better than plain old Chinese food or Mexican food”!  While it is true that sometimes a compromise can lead to a happy middle ground, it is the exception, not the rule.  Also, I would argue that if you truly believe that Asian-Mexican Fusion is a step up from just Chinese or Mexican food, then the solution in my scenario is more of a Collaboration than a Compromise.  And if you’d like to learn more about what that is and why I think this might be a Collaboration, please read my blog on Collaborating Negotiators.