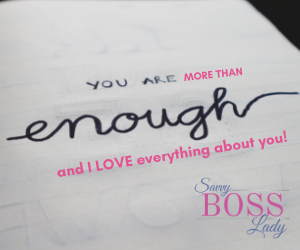 If you’ve ever met me at an event of any sort for business, you might think I’m one of “those” people.  You know the ones.  The people who have it all together.  The people who are so “perfect” that it makes your skin crawl.  The people who are intimidating in their togetherness.  And to be honest, that is EXACTLY the image that I try to portray.  But recent events have made me examine WHY I work so hard to make it seem as though I have it all figured out, all together…and one profound truth came through to me during that reflection: my origin story is the story of “Not Enough.”

Growing up, I felt the sting of “not enough” so frequently and consistently that it was my normal.  I don’t think I even knew that it was possible to be “enough” until I was out on my own as an adult.  Now I’d like to pause here and say that overall, I had a great childhood.  I have a family that loves one another.  My parents have been married for nearly 50 years.  I was never left hungry or neglected.  Were there struggles?  Yes.  Did some terrible things happen to me along the way?  Yes.  But overall, I had a wonderful childhood and I am grateful to my family for that experience.

With that being said, I still grew up with this sense of “not enough” that followed me around for most of my life.  In our house, we were given expectations, not praise.  If you brought home straight A’s, that was great, but nothing to celebrate…A’s were the norm, the expectation.  If you brought home a B though…it was as if the rug had been pulled out from under you!  “I know you can do better than that.” Was a common phrase in our household.  And while I know in my heart that my parents just wanted us to achieve that absolute best in our lives, these expectations left me feeling like I was “not enough” unless I was perfect.

When I was in elementary school, my family moved to Marin County, California.  It was a bit of a culture shock coming from San Leandro, California.  Suddenly, my family and I were “not enough” for the world in which we lived.  Our house wasn’t big enough for a large family like ours.  Our clothes weren’t nice enough, designer enough to match those of our friends and neighbors.  My parents’ jobs weren’t impressive enough in comparison to those of my peers’ parents.

I began to shrink into myself.  I became more introverted.  I threw myself into my studies and family life.  I made very few real friends…and the ones I did make seemed to leave me without rhyme or reason.  My best friend in 4th through 6th grade suddenly was “too cool” for me at some point during 6th grade.  My first boyfriend suddenly stopped hanging out with me with no explanation.  And so, my “not enough” reared its ugly head some more and I retreated further.

This pattern played out in so many ways as I grew that I have lost track of them all.  But over time, everything that happened in my life seemed to reinforce this feeling of “not enough” that I had been carrying around for as long as I can remember.  As a young woman, I received multiple high value college scholarships based on the quality of my skills as a vocalist (singer).  And yet, when I would sing along to the radio in the car with my friends, and they would compliment someone else on their voice and not me, I would feel that sense of “not enough” creep in again.  Over time, I internalized that my voice, one of my true talents, was “not enough” and I stopped singing.

I could go on and on with stories of how my personal “not enough” demons were formed, but that’s not the point of this post.  The point is that I am learning to love myself and all my talents and gifts.  I am learning that I don’t have to be “perfect” in order to be enough.  I am embracing the fact that perfect is overrated…that enough is the best form of perfect.  I am more than enough just as I am.  The past is just a path to the present.  The present is all that matters.  I am enough in the present.  And because of all of this, my future is beautiful and bright.

If you ever need a reminder of your own “enough-ness,” I am here to tell you:

YOU ARE MORE THAN ENOUGH, AND I LOVE EVERYTHING ABOUT YOU!!!!